How to Get to Mount Kailash and Lake Manasarovar? 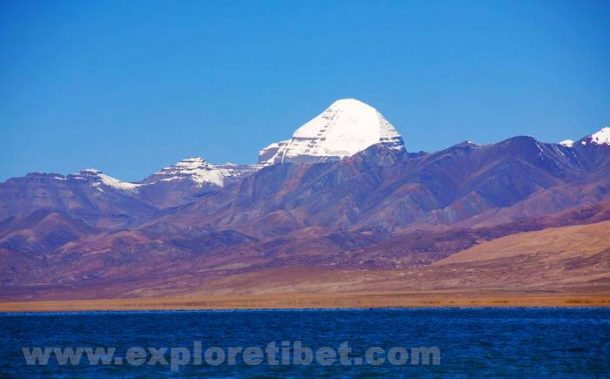 Mount Kailash is a massive pyramid of black rock covered with snow. It is considered the center of the universe, known as the legendary Mount Meru in Buddhism and Jainism, and the home of Lord Shiva in Hinduism. A unique mountain in the range, it stands tall above its counterparts at an altitude of 6,638 meters above sea level. In comparison, this is not one of the highest mountains in the Himalayas. It has never been climbed due to its unique religious and spiritual status in Tibet.

To the south of the sacred mountain lies one of the Great Three Holy Lakes of Tibet, Lake Manasarovar. Hindus believe that the lake was created in the mind of Lord Shiva and manifested on earth. The pilgrims regularly travel to the lake to absolve their sins by bathing in its clear waters. In Buddhism, it is held sacred as it is believed to be where Maya Devi conceived her son, Siddhartha Gautama, known worldwide as Buddha.

Where are Mount Kailash and Lake Manasarovar?

Lying close together in the Ngari Prefecture, Mount Kailash and Lake Manasarovar are two of the most spiritual sites in the world for four different religions. The destinations of hundreds of thousands of tourists and pilgrims every year. These sacred places hold a special place in the hearts of Buddhists and Hindus alike.

Mount Kailash lies in the Gangdise Mountains, part of the Trans-Himalaya that stretches across Tibet to Qinghai Province. Lying on the southern edge of the Gangdise Mountains, not far from the Chinese border with the Indian state of Uttarakhand, Mount Kailash is 1,211 kilometers (752.5 miles) from the Tibetan capital of Lhasa, by road. The mountain is a mere 955 kilometers (593.5 miles) from Lhasa in a direct line, though there is no available flight to the mountain region.

It lies at 47.6 kilometers due south of Mount Kailash. An alluvial plain separates the Gangdise Mountains from the Himalayas that line the border between China and India. It lies the sacred lake Manasarovar, next to its twin, Lake Rakshastal. Located just north of the ancient Guge Kingdom town of Burang, the “Gateway to Mount Kailash.” Lake Manasarovar is unique in Tibet, as it is a freshwater lake, whereas most of the lakes in Tibet are saline lakes.

Mount Kailash and Lake Manasarovar can be done from one of two directions, traveling from the east, along with the Friendship Highway and G219 from Lhasa. The Tibetan capital, and from the south, crossing the border traveling from Kathmandu.

Travel from Kathmandu to Mount Kailash

One of the more popular routes to Kailash is from Kathmandu, the capital of Nepal as Tibet’s closest neighbor is Nepal. It is the only country that has direct access to Tibet. With a border crossing at Gyirong Port/Rasuwa Gadhi and direct flights from Tribhuvan International Airport to Lhasa Gonggar International Airport. With two main routes to get to Ngari Prefecture, it is preferred for many tourists traveling to the sacred mountain.

The border between China and Nepal- Zhum Bridge entrance for TibetThe fastest way to get to Kailash. However, it does require you to fly to Lhasa first and then transfer to Ngari Gunsa Airport. As there, I was on a direct flight to Gunsa Airport from Kathmandu. There are a couple of daily direct flights from Kathmandu to Lhasa. It takes around 90 minutes and flies directly over the summit of Mount Everest en route to Lhasa. Flights are not cheap, though, starting at more than 400 dollars for an economy ticket, and it can be an expensive route to take.

From Lhasa, the connecting flight takes you to the recently built Ngari Gunsa Airport at Shiquanhe. There is only one flight to Gunsa from Lhasa, which leaves at around seven in the morning. The flight takes just 2 hours to get to Ngari and costs around 380 US dollars. The main downside to this is that you do not get a chance to acclimatize before reaching Darchen. It leaves you at a higher risk of getting altitude sickness.

The alternative is the drive from Lhasa to Darchen, which takes around three days. You will take a tour from Lhasa, which includes acclimatizing and sightseeing in the Tibetan capital before you leave. And will stop overnight in Shigatse and Saga before reaching Darchen in the afternoon of the third day out of Lhasa. The route from Lhasa to Darchen is stunning Himalayan views and dramatic Tibetan landscapes and scenery. Stops are made for you to admire and explore the spectacular sights of the plateau as you travel, including Yamdrok Lake, the Karola Glacier, the Gyantse Kumbum, and Tashilhunpo Monastery.

There is another route, which takes you directly from Kathmandu overland to Kailash. By crossing the border at the now-famous Gyirong Port. The journey takes 2-3 days, depending on how fast you travel. But it is a good idea to acclimatize in Gyirong Town or at least one day after climbing from a relatively low altitude in Kathmandu to more than 2,700 meters in Gyirong Town. With the altitude at Darchen being higher than 4,500 meters. It is best to acclimatize before continuing the travel to reduce the risk of altitude sickness in the higher latitudes of Ngari Prefecture.

After acclimatizing in Gyirong Town, it is a drive up through Gyirong County to the G219 National Road. It takes you to Darchen without turning it off. From Gyirong, the road heads northwest to Saga County, a short but scenic drive, where you will sop for another night, before continuing along the road to Darchen the following morning. The trip is long, taking 8-9 hours to get to the sacred mountain. But you could witness some of the most stunning grasslands on the plateau. That filled with a plethora of plateau wildlife and a multitude of lakes and mountains.

For any visit to Mount Kailash, all of the permits for travel to Tibet are required, including the Tibet Travel Permit, the Alien’s Travel Permit, the Frontier Pass, and the Restricted Areas Permit. These are needed for entry to Tibet from Kathmandu, even if you are not traveling overland before leaving Nepal.

Travel from Lhasa to Mount Kailash

The route from Lhasa to Mount Kailash is one of the most exciting and spectacular roads in Tibet. It traverses almost the entire Tibetan plateau from east to west as the most popular of all the routes to Kailash. Around 90 percent of all tourists and pilgrims take the road from Lhasa, following the G318 Friendship Highway for part of the route.

Traveling through Gyantse, Shigatse, and Saga, many tours to Kailash also stop at Mount Everest to take in the view of the world’s highest mountain along the way. After visiting Everest, the route then takes the same path as from Kathmandu. By following the G219 through Saga to Darchen. As with the other routes to Kailash, the same documents and permits are required and must be obtained before traveling outside Lhasa.

Starting at Lhasa is an excellent way to acclimatize to the higher altitudes of the Kailash area of Ngari. Especially if you are taking the trek around the sacred mountain’s kora route, once you arrive in Lhasa, you will generally spend a couple of days acclimatizing to the higher altitude of the Tibetan capital. To help reduce the risk of altitude sickness as you travel higher. This acclimatization period also gives you the chance to travel around the city and view stunning sights, such as the Potala Palace and Jokhang Temple.

It is possible to take a flight from Lhasa to Gunsa Airport in Ngari, which takes just two hours of flight time. The flights, however, are not cheap and start at around US$ 380 for an economy ticket going one way. However, it does cut the travel time down dramatically and is suitable for those that want to trek the kora route but are short on time.