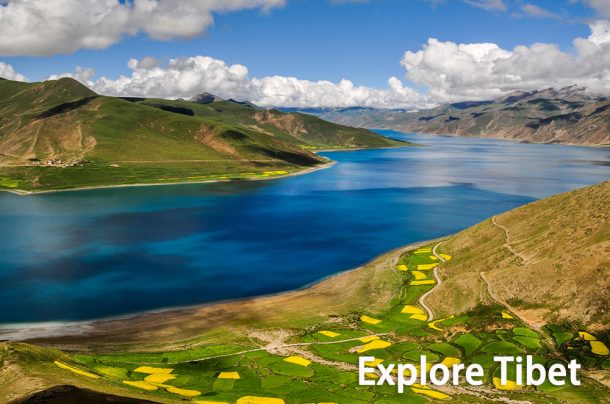 Tibet is a land of stunning mountains, vast open prairies, and beautiful tranquil lakes, lying at the roof of the world on the world’s highest plateau. Here Explore Tibet has recommended the most worth visiting lakes in Tibet that you can’t miss during your Tibet tour.

An unpolluted paradise, Tibet has a vast number of lakes scattered across the plateau, with freshwater lakes, saltwater lakes, and even salt lakes among its many types.

With over 800 lakes in the region, Tibet has the largest concentration of lakes per square mile than any other place in the world and many more than in any other plateau environment. With many of the lakes being saltwater lakes, geologists believe that the area of the plateau was under the ocean, and the saltwater lakes are what is left of the ocean as it receded from the Asian continent millions of years ago.

With the movement of the earth that lifted the plateau into the sky, when the Indian tectonic plate pushed under the Eurasian plate, these lakes lifted aloft as well, remaining saltwater until now. The freshwater lakes were formed during the tectonic movement, as sections of the plateau dipped and caught the run-off waters from the mountains and the rains in later millennia or were formed by streams and rivers collecting in large basins with no outflow.

However they came about, it remains that Tibet is the home of many of the most beautiful lakes in the world, some of which also carry a huge religious significance in both Hinduism and Buddhism.

Lying in the west of Tibet, just to the south of the sacred Mount Kailash, lies Lake Manasarovar, one of the Great Three holy lakes in Tibet. Manasarovar Lake is one of the must-see attractions of western Tibet and is held as sacred in Hinduism and Buddhism. Locals believe that the lake contains sacred waters bestowed by Buddha, and to bathe in its waters can wash away the sins of a lifetime. The water is beautifully transparent, and reflects the view of the clouds and mountains in a way that no other lake in the world can. Also known as Mapam Yumtso, this freshwater lake feeds off glacial run-off from Mount Kailash. At 4,590 meters above sea level, it is one of the highest freshwater lakes in the world, and is round in shape, likened to the sun in Tibetan Buddhism. The lake has an overflow channel that links it with its close neighbor, Lake Rakshastal, a saltwater lake.

Neighbor to Lake Manasarovar, Lake Rakshastal is a saltwater lake that feeds from Lake Manasarovar by the natural Ganga Chhu channel that runs between them. The channel only flows one way, though the addition of freshwater from Lake Manasarovar has done little to reduce the saline level of the lake, and it remains without fish and aquatic plants, giving rise to legends that the waters are poisonous by the locals. The name means, literally, “the lake of the demon” in Tibetan, and is considered to be a place of severe penance in Hindu theology. The lake contains four small islands, Topserma, Dola, Lachato, and Dosharba, which are used as winter pasture for nomadic yak herders.

A freshwater lake to the south of Lhasa, Lake Yamdrok is a popular place for tourists, as it is shaped like a huge fan, and extends over a vast distance, though it is not the largest lake in Tibet. The lake is surrounded by snow-capped mountains and is fed by a huge number of small streams that refresh the body of the lake constantly. Another of the Great Three holy lakes of Tibet, it is host to the largest hydro-electric power plant in Tibet, which lies near the village of Baidi at the western end of the lake. The lake is revered in Tibetan Buddhism, and is believed to be part of the spirit of Tibet, and Tibetans believe that if its waters dry up, the region will no longer be habitable by people. The lake is also the home of the Samding Monastery, the only monastery to have a female incarnation as abbot, who heads a community of around 30 monks and nuns.

Known in Tibetan as “Heavenly Lake”, Lake Namtso, or Nam Cuo ( in Chinese), is the other of the Great Three holy lakes of Tibet, and lies to the north of Lhasa, in Damxung County. A mountain lake, it is surrounded by mountains to the east and south, and by the Changtang grasslands to the north and west. Lying at an elevation of around 4,718 meters, this saltwater lake is the largest lake in Tibet, though not the largest on the plateau. Lake Namtso contains five uninhabited islands, which were once used as hermitage sites for pilgrims and hermits of Tibetan Buddhism. The pilgrims would walk across the ice to the islands at the end of winter, carrying all they needed for the summer months, and spend their time in meditation until the ice covered the lake once more, when they would move back to the mainland. The lake is also the summer home of many migrating birds, including the Ruddy Shelduck, which returns to the lake every summer.

Known locally as Cuogao Lake in Tibetan, Basum Tso is the largest lake in eastern Tibet, and lies in Gongbo’gyamda County in Nyingchi Prefecture. The lake is surrounded by snow-covered mountain and natural forests, and is located far from any centers of civilization. Well known for its beauty and tranquility, the lake waters are dark blue and reflects the tall mountains covered in woodlands perfectly in its flat surface.

A holy lake of the Nyingma School of Tibetan Buddhism, the small island near the lake’s shore is home to a sacred Nyingmapa temple, which dates back hundreds of years. Near the south shore of the lake lies the “seeking child” hole, blessed by the guru Padmasambhava. Locals believe that those eager to have a baby can place their hand in the hole and be blessed with child.

Lying to the south of Lake Yamdrok, Lake Puma Yumco is located at around 5,30 meters above sea level. The lake is fed by mountain streams, but has no outlet. Meaning “The Blue Jewel which is floating in the sky”, the lake is rarely visited by tourists, due to its location in Shannan Prefecture, and is used by local shepherds for their sheep. Grazing on the lush pastures that lie around the lake, the shepherds used to cross the lake in winter, over the ice, but in recent years the ice has been too thin to cross. The water of the lake is a deep, rich blue in color, and is known to have extraordinary amounts of plankton in its depths. The winter causes the lake to freeze, and the repeated fracturing and refreezing of the lake causes intricate patterns to appear in the icy surface of the lake.