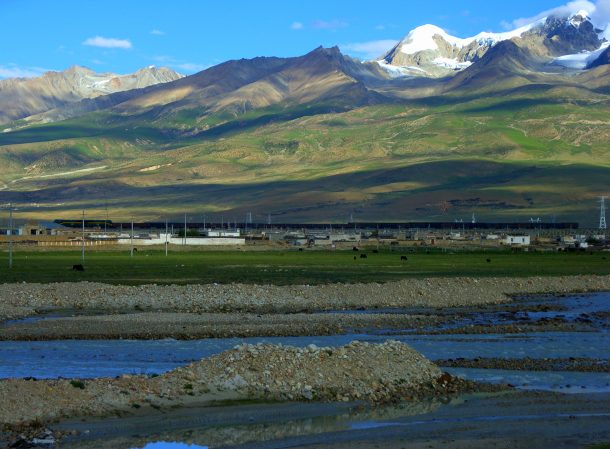 The Qinghai-Tibet Railway is the most famous railway in the world. It is a high-elevation railway that connects Tibet with the rest of China. Despite many experts saying it could not be done, the section from Xining to Golmud was completed in 1984. 22 years later, after the development of new methods of railway construction to overcome the many obstacles that the railway to Lhasa posed. The Qinghai-Tibet Railway was finally inaugurated on July 1st, 2006. One of the most astounding achievements in the modern engineering of the 21st century, the Tibetan railways that could not be built was finally opened for passengers. It is starting from the Qinghai Provincial capital of Xining. The railway line to Lhasa broke innumerable world records, as the highest railway in the world with an average elevation of more than 4,500 meters. As well as having the highest railway station, the highest railway tunnel, and the longest tunnel through permafrost. Running for 1,956 kilometers, the railway climbs up over the high Kunlun and Tanggula Mountains. It crosses the vast plains of the Tibetan plateau and running along some of the region’s most spectacular valleys.

But it did not stop there. After the completion of the railway, other railway lines began to be planned, connecting Lhasa to other parts of Tibet, and even to other countries. Some of these new lines are still being planned, and some are already under construction. But, soon enough, Lhasa will be a city connected by rail to Nyingchi, Sichuan, Yadong, and eventually, even Nepal.

The Lhasa to Kathmandu Railway has long been talked about and has been under planning for decades. Yet, recently, those plans developed into a confirmed agreement with Nepal to construct a railway line all the way from Lhasa to Kathmandu. Part of that railway line has already been built, connecting Lhasa with Shigatse, the second city of Tibet. It is the home of the Tashilhunpo Monastery, the traditional seat of the Panchen Lama. Once completed, it will traverse the vast Tibetan plateau, crossing the mighty Himalayas and dropping down into the Kathmandu Valley. An agreement was made and finalized in June 2018 to confirm the completed construction of the railway line to Nepal by 2024. The route of the train line to Nepal is believed to be planned to follow the route of the Friendship Highway for most of its length. Indeed, the section from Lhasa to Shigatse, which is already complete. It does follow the general route of the G318 National Highway. Opened on August 15, 2014, the railway made travel to Shigatse City much easier and faster, with three trains daily each way. The remainder of the route, which was meant to follow the Friendship Highway all the way to Zhangmu. It had to be redefined after the earthquake of 2015 closed the border port at Zhangmu/Kodari. The revised plans, according to some sources, is expected to head further west. It is passing to the south of Paiku Lake, and south through the Gyirong Valley to cross the border at Gyirong Port and Rasuwa Gadhi.

The railway is already open to Shigatse. It gave rise to considerations of other railways that could be built as branch lines. The Chumbi Valley area of Yadong County in the south of Tibet is one of the routes that are used for Indian Pilgrims to Mount Kailash to cross the border into Tibet. It is not a border crossing that is open for major international travel, a branch line was proposed that would run from Shigatse to Yadong County. It lies on the border with the Indian State of Sikkim and with western Bhutan.

The first part of this proposed line will follow the route from Lhasa to Shigatse. And from there turn south to head for the border with Sikkim in Yadong County. Railway service to Yadong would be a blessing for both local Tibetans, who have limited resources for travel to the rest of Tibet. For the Indian pilgrims that regularly cross the border on their pilgrimages to the world’s most sacred mountain. However, this branch line is still in the planning stages. The construction does not yet start, despite reports that state it is expected to be complete by 2020. The current route by road to Yadong Town from Lhasa takes around 11-12 hours of driving. It would be a two-day trip at least for most people. The railway, once it is complete, would cut this travel time down to less than five hours.

The second major railway line that is already under construction to link Tibet with the rest of China is the Sichuan-Tibet Railway. It will run from Chengdu in Sichuan Province all the way to Lhasa. The construction of the section from Lhasa to Nyingchi began in 2014. It is well underway and expected to be completed by 2020.

It covers the distances of 435 kilometers to Nyingchi Railway Station. And takes around 2-3 hours for the journey. Construction in the region is harder than was found when building the Qinghai-Tibet Railway. Mainly due to the remote areas and the unique geological formation of the mountains and valleys in the area. The area is also prone to landslides, debris flows, flood damage, and earthquakes. All of them has to overcome in order to complete the railway lines. The route was originally surveyed in the 1950s, but construction technology at the time was not advanced enough to begin building the railway.

Taking a different route, the train will travel along the Lhasa-Shigatse line first, turning east at Gonggar to head through Tsedang and Mainling to arrive in Nyingchi City. The route includes 47 tunnels, of which the longest is the Dagala Tunnel, at 17.31 kilometers. There are also 118 bridges along the route. The most spectacular of which is the Zangmu Grand Bridge, the first weather-proof steel bridge that is coating-free. As part of the massive Sichuan-Tibet Railway Project, the stretch from Lhasa to Nyingchi is the most important stretch of track. Eventually, once it meets the tracks being built from Chengdu to Nyingchi. It will stretch for more than 1,600 kilometers, and reduce the travel time to Tibet drastically, making it easier to get to Lhasa in less than a day. The line will also become part of the proposed rail lines from Yunnan and Gansu to Tibet.

previous post Top Sites to visit in Tibet for tourists
next post Why should you travel to Lhasa with your family?