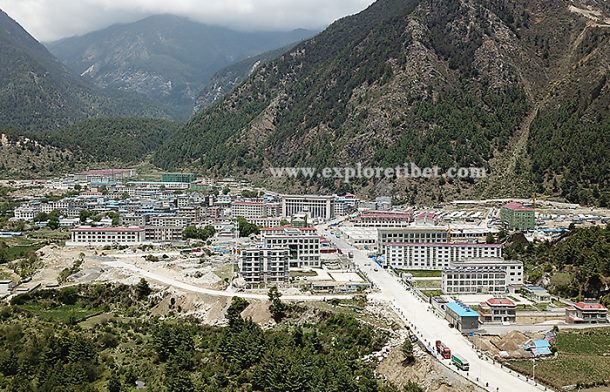 Tibet Overland group tours from Lhasa to Kathmandu have always been a popular option for travelers to Tibet. With the re-opening of the border crossing between Nepal and Tibet, at Gyirong Port, tours are once again available for travelers wishing to tour overland in Tibet, and end by going on to Nepal, across the Gyirong / Kyirong border. Kyirong town from Tibet to kathmandu

The Lhasa to Kathmandu Overland tour starts at the capital of Tibet, and takes you across the region to the Nepal border, where you will be able to get the local bus down into the Kathmandu Valley, the epicenter of Nepal, which is known locally as “Nepal Proper”. The route covers almost 1,000 kilometers across the plateau, over the Himalayas, down into the valley, traversing immense plains and high mountain passes, and seeing some of the most beautiful and breathtaking sights that Tibet has to offer. Experience the unique Tibetan culture, the important Buddhist religious centers, and the world’s most incredible lakes and scenery, as your unforgettable trip takes you across the roof of the world.

What is a “Tibet Small Group Tour”?

Many people think that when you join a “group tour” that you will be part of a huge group of people all traveling on a bus. This could not be  wrong with a Tibet group tour. With Explore Tibet, group tours are small enough to be able to fit into a normal vehicle, will never exceed the maximum of ten people per group, and can often be less than that. Explore Tibet currently has the smallest group tour on the market, while other operators include up to 12 or 15 people per group. Tibet Group tours are an ideal option for traveling in Tibet. As with all visits to exotic places, getting to Tibet is not cheap, and the cost of the tour itself, considering all visitors must have a guide and private vehicle at all times, can be quite expensive, although the actual tour of Tibet and the sights and experiences make it all worthwhile. However, by becoming part of a group tour, you can drastically cut down on the cost of the tour by sharing the costs of the guide/driver and vehicle with other travelers who wish to visit the same places.

Tibet is widely known as the roof of the world, and high mountains and lush valleys, the region is full of beautiful landscapes and stunning wildlife. Filled with monasteries and a unique culture, Tibet is a land where everyday people think on the mysteries of the universe. For those who have traveled the world, you can guarantee Tibet has something you have never seen. From the amazing monasteries to the nomads with their yaks, the region is unique in culture and religion, and it can be hard to see where one stops and the other begins.

Tibet is famous for its group tours, and thousands of tourists visit every year to experience the uniqueness of Tibet. The land abounds with monasteries, and many of them are included in Explore Tibet tours. The spectacular sight of the Potala Palace rising above Lhasa is one of the most breathtaking sights in Tibet. Jokhang Temple, also in Lhasa, is the center of Tibetan Buddhism, and is the most revered of all Tibetan temples and monasteries.

Nepal is well known for its beautiful alpine scenery and tropical landscapes. With high mountains on the border with Tibet, Nepal also offers some great mountain adventures, and has a base camp at the foot of Everest. Lower down, the scenery changes to tropical and sub-tropical climates.

Lumbini is one of the most famous pilgrimage sites in Nepal, and is where the Buddha, Siddhartha Gautama, was born in 623 BC. One of its most famous pilgrims was the Indian emperor, Ashoka, whose pillar still stands in the world famous gardens. Chitwan National Park is the first national park in Nepal, and one of the best sites for animal lovers. The animals in the reserve include the Royal Bengal Tiger, The Gharial Crocodile, and the One-horned Rhinoceros.

On your arrival, you will get to see some of the city, and get your first impression of the region and its people. After a good night of rest, your tour starts properly on day two. The day is spent taking in the amazing sights of the Potala Palace, Jokhang Temple, and Barkhor Street. Day three sees you taking a trip out of Lhasa to visit the monasteries of Sera and Drepung, where you can watch the intense debates of the Sera monks, and discover the spirituality of Drepung, the most important monastery of the Gelugpa sect of Tibetan Buddhism.

Day four sees you taking a road trip from Lhasa to Shigatse, via Gyantse, previously the third largest city in Tibet. Gyantse is the site of a former British military garrison that helped to train Tibetan officers in the first half of the 20th century. On the route, you will visit Yamdrok Lake, one of the three Tibetan holy lakes, and the largest freshwater lake in the region. On the edge of Gyantse sits Pelkor monastery, with the amazing Kumbum Stupa close by.

From Shigatse, you will travel to the famous Sakya monastery, one of the most unique monasteries in Tibet. The route to Sakya monastery crosses the Tso La pass, at 4,500 meters above sea level. After touring Sakya monastery, it is on to Shegar, for an overnight stay

On day six you will Drive to EBC, crossing Gyatso La Pass at 5,250 meters above sea level. After settling in at Rongbuk tent guesthouses, you will get to experience what many travelers and mountaineers have: Everest Base Camp. It is a short 2-hour trek to EBC, and the night will be spent in the tent guesthouse. In the morning, after watching the sunrise on the side of Mt. Everest, you will drive to the border town of Gyirong, for the night’s rest, essential after the visit to the dizzy heights of Everest. On the way you can enjoy the stunning views of Lake Pelkutso and Mount Shishapangma, arriving in Gyirong in the late afternoon.

After a good rest in the guesthouse in Gyirong, your Tibet group tour guide will take you to the border crossing, where you will part ways, and you will be able to get the bus from the Resuo Bridge that takes you down into the valley to Kathmandu.