The Antelopes of the Tibetan Plateau -Chiru and Goa 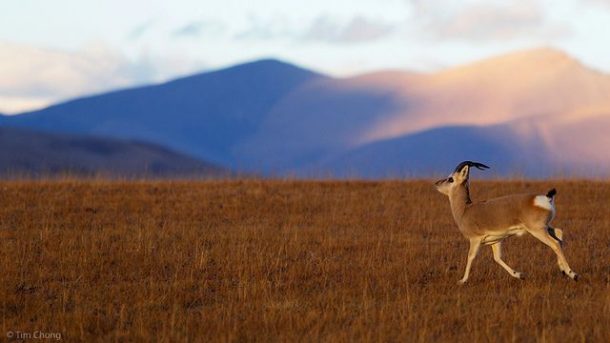 The Tibetan plateau is a vast and open land that is interspersed with several mountain ranges of the Transhimalaya. In between these ranges, across the north and northwest of the plateau lie the vast rolling plains and prairies of the highest plateau on the world. With average elevations that reach as high as more than 5,000 meters above sea level, these unique ranges are the homes and habitats of many of Tibet’s stunning wild animals.

Out in these vast open spaces, two of the most unique varieties of antelopes run free across the plains and prairies, following ancient migration routes that take them to summer and winter grazing areas and their annual breeding grounds. Known as the Chiru and the Goa, these beautiful creatures are both classes as “Near Threatened” in their conservation status, and are now listed as protected species within China by the government under the Convention on International Trade in Endangered Species (CITES).

While these spectacular creatures are not on the endangered list, there are many dangers they face, and mankind and his encroachment on their natural ranges are the biggest threat to their continued existence.

Known locally in Tibet as the Chiru, the Tibetan antelope is one of the most stunning species of animals on the plateau, found mostly in the north and northwest of the region, on the plains and prairies. Once one of the most widespread animals on the Qinghai Tibet Plateau, the Chiru roamed the vast plains in search of food, following its own migration routes in herds that once numbered in their hundreds of thousands.

Today, there are fewer than 150,000 left in existence, thanks to hunting that has reduced their numbers drastically over the last 200 years. Numbers are now increasing, but the demand for the underfur that is used to make luxury shawls that are in high demand in India has meant that poaching is still an issue.

Origins of the Chiru on Tibetan plateau

Technically, the Tibetan antelope is closely linked to the goat-antelopes and was first identified as the Hodgson’s Antelope or Pantholops hodgsonii. The only species in the genus known as Pantholops, this unique creature has been given its own genus due to the genetic evidence that separates it from other bovids.

Standing at around 83cm for males and 74cm for females, this medium-sized antelope is one where only the males have the long typical horns, and the coats are a reddish-brown color with a whitish underbelly. The slender ridged horns of the males can measure up to two feet in length. The Chiru is believed to have lived at the high altitudes of the plateau for more than 12 thousand years in a slightly smaller form than the modern species.

Natural Habitats of the Chiru

The Chiru are natural inhabitants of the Tibetan plateau and live in the open alpine areas and cold steppe regions at altitudes of between 3,250m and 5,500m. The herds prefer the flat open terrain of the plateau, with its sparse vegetation cover to the wooded areas that can be found in rare locations in northern Tibet. Found almost entirely in China, with only a few found across the Chinese border in Ladakh in India.

Some of the earliest specimens were actually discovered in Nepal in the late 19th century, but the animals have since become extirpated in the country. Majority of the antelopes today can be found on the vast Changtang Grasslands, within the area of the Changtang Nature Reserve in northern Tibet’s Nagqu and Ngari Prefectures, and into southern Xinjiang and western Qinghai.

Known in Tibet as the “Goa”, the Tibetan Gazelle is a completely different animal from the Chiru and is a smaller antelope species that live within the bounds of the Tibetan plateau. Relatively small, with slender bodies and curved horns, these graceful creatures are unlike most other ungulates and form into small family groups rather than large herds. Family groups of Goa usually number around 10-12 animals, and the males are known to be solitary, meeting with family groups only to mate.

While the populations of Goa have declined over the last few centuries, they have not been as heavily hunted as the Chiru, mostly due to living at high-altitude regions with little to no human habitation and do not compete with livestock for the grazing lands. The Goa primarily eat local vegetation such as herbaceous flowering plants and legumes and only supplement their diet with small amounts of grass and sedge when food is in short supply.

Origins of the Goa

Of the Bovidae genus of Procapra, the Goa are small antelopes that reach around 54-65cm tall at the shoulders for both males and females. Their bodies are slender, measuring up to a meter long and weigh on average around 15kg. The males have long tapering horns that are ridged and back-curved from the front of the forehead, set close together.

The tapering horns run only diverge within the last 10cm of their 26-32cm length.  Only the males have horns, and there are no other markings to distinguish males from females. The Goa is a grayish-brown color all over, with black-tipped tails and no undercoat, with the long guard hairs getting noticeably thicker in winter.

Natural Habitats of the Goa

Goa is native inhabitants to the Tibetan plateau, and mostly inhabit the terrain at altitudes between 3,000 meters and 5,750 meters. Almost completely restricted to the Chinese provinces of Gansu, Qinghai, and Sichuan and the autonomous regions of Tibet and Xinjiang, only a small population exists across the border in Ladakh.

Primarily found in the alpine meadows and high-altitude steppes of the plateau, the small family groups are scattered more widely across the plateau than the Chiru, with a low density of population averaging around 3 animals per square kilometer.

Dangers to Chiru and Goa

While the Chiru are still being hunted by poachers for their valuable furs, the Goa are not so unfortunate, and their main threats come from the encroachment of humanity on their natural ranges. As man pushed further into the grasslands and steppes of the plateau, these shy and timid beasts are pushed into much smaller ranges. The expansion of agriculture and pastoralism in western Tibet have already forced the Goa further north, and too much encroachment onto their native territories could have potentially disastrous results.

Chiru, however, is much more widespread across the grasslands in the areas where nomads and domestic yaks graze, and there have been inroads into their territories and migration routes over the last 40 years that have seen drastic reductions in their numbers. Add to that the danger of poaching for their soft underfur, which is used to make scarves and shawls that fetch up to US$5,000 in India and around US$20,000 in the west, and the numbers dropped from the millions to less than 75,000 by the 1990s.

Modern conservation efforts on the plateau have led to an increase in numbers, and while the Qinghai Tibet Railway has managed to maintain the 33 migration routes of the herds across the plateau using migration passages under the railway lines, there is also a higher risk of poachers coming to Tibet along with the increase in tourists using the trains.

previous post Spectacular Scenery of the Qinghai Tibet Railway to Lhasa
next post Travel News: The Southern Slope of Mount Everest In Nepal has been overcrowded.