In Tibetan Buddhism, there are two popular ways of accumulating religious merit: prostrations and pilgrimages. A full prostration requires a pilgrim to put both knees, elbows, and forehead on the ground to show veneration of the Lord Buddha, his teachings, and the community. At the same time, pilgrimages require Tibetans to travel to holy sites and perform circumambulation of it to absolve them of their sins.

But some choose to combine both practices. Equipped with thick leather aprons, wooden clogs to protect their hands, and shoes reinforced with rubber toecaps, these pilgrims travel one prostration at a time.

They spend months and even years literally on the road, in a quest to gain enough religious merit to be reborn as a human in the next life. For some, it is a bid to reach enlightenment and escape the suffering of human existence.

Pilgrims begin by placing their hands in the lotus position (palms and fingertips touching with your thumbs slightly tucked in) at the crown of their head. With this action, the pilgrim honors Guru Rinpoche (the second Buddha), purifies the body’s defilements, and establishes the potential to realize nirmanakaya (the physical form of the Buddha).

In the same position, the pilgrim brings their hands to the throat in reverence of Guru Rinpoche’s enlightened speech and establishes the potential to realize sambhogakaya. Known as “the body of enjoyment,” this is the Buddha’s physical but not earthly form, appearing in practitioners’ dreams and visions. 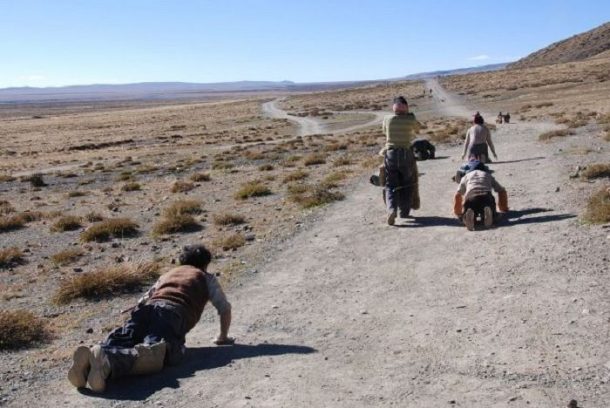 From there, the hands go to the heart, acknowledging Guru Rinpoche’s enlightened mind and ridding the mind of any obscurations. This is to establish the potential to realize dharmakaya, the spiritual form of the Buddha.

The actual prostration requires all five limbs, the forehead being the fifth limb, to contact the ground. Lying prone, the pilgrim then stretches their arms forward and then brings both hands in the lotus position to the forehead to acknowledge Guru Rinpoche’s blessing. The pilgrim then picks him or herself up and takes three small steps before beginning the next prostration.

Though pilgrimages are made on horseback or motorized transport in the modern age, walking is acknowledged as the best way to gain religious merit. Prostrating the entire pilgrimage is thought to compound the merit you receive.

Pilgrims travel to numerous sacred sites spread out all over Tibet. Natural sites like mountains and lakes are thought to be the abodes of different spiritual deities. At the same time, manufactured structures like monasteries, in particular, attract pilgrims because of the different Dalai Lamas that erected them. 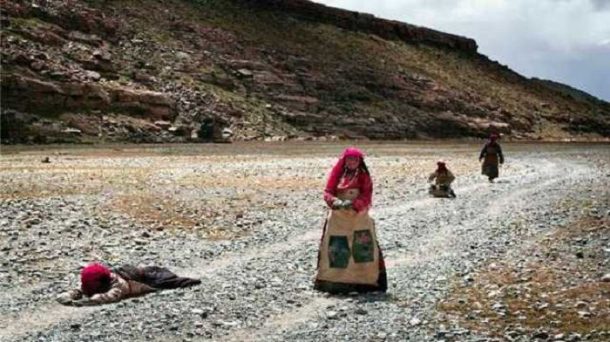 The physical toll of the pilgrimage is brutal. Most pilgrims adopt a strict travel schedule in which they might find themselves prostrating from morning until night. Of the five contact points in a prostration, only the forehead is left uncovered. In Lhasa, you can often tell who has just completed a pilgrimage by the black mark on their forehead.

Once pilgrims reach their holy site, they complete a circumambulation, or a spiritual walking circuit, of the holy site to gain even more merit. For example, completing a circuit around Amnye Machen in Amdo Prefecture is equal to chanting the six-syllable Buddhist mantra 8 billion times. 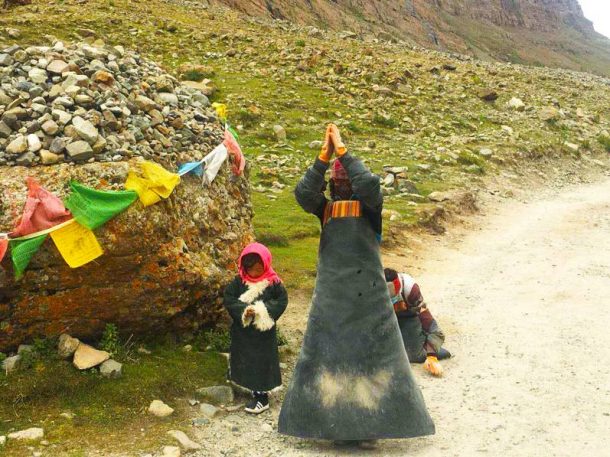 To achieve instant enlightenment, Tibetan Buddhists believe you must circumambulate Mt. Kailash in Nyintri Prefecture 108 times. This number is believed to be the total number of feelings an individual experiences in their lifetime. The six senses are multiplied by whether they are painful, pleasant, or neutral. The total is then multiplied by whether these are internally or externally generated and again by the past, present and future.

When you are in Tibet, it is considered a good deed to donate alms to traveling pilgrims. If you have some money to spare, consider helping one of these prostrating pilgrims. It will go toward your religious merit count and self growth.