Most people tend to travel to Tibet in the months from April to October when the weather is warm and pleasant. When the climate most suits what they are looking for. For many people, a trip to Tibet in the winter months from November to March is avoided, simply because they believe that the plateau is covered in snow and impossible to reach, as well as being too cold. This is one of the myths about Tibet that is simply not true. The plateau may be high and cold at times. But even in the depths of winter, in the coldest month of February. The sun is still shining during the daytime, and it is still warm enough to walk around Everest Base Camp without looking like you are making an expedition to the south pole at the coldest time of year. The Tibet winter tours are the most adventurous tours in Tibet. 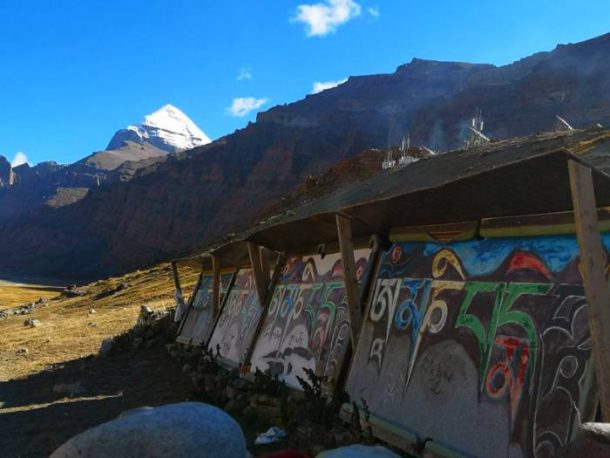 Dispelling the myths that surround the Tibet winter tours are the best way to change how people see the Tibetan plateau in the winter, and the best way to find out what it is really like in Tibet from November to January is to go there. And there are many advantages to traveling to Tibet in the winter months. Flights to China are often cheaper because winter is China’s low season for tourism too. Flights to Lhasa from some of the gateway cities across China can also be cheaper than taking the train, and the accommodation in Tibet are often discounted in the low season. Plus, there are fewer tourists, because they think it is too cold, so the attractions are not as crowded.

There are many places you can go to Tibet in the winter, and you are really not restricted to just hanging around Lhasa for the entire trip. Although the Lhasa tours are a great way to see the city in the winter when even the local people have more time to stand and chat. Winter is their time for pilgrimage and devotion to their Buddhist faith, as many of the farmers and herders of the plateau have little work to do on their farms. And Lhasa is the center for pilgrimage in Tibet, most of the pilgrims heading straight for the Jokhang Temple, the most sacred temple in the region. Winter tours can be local to Lhasa, head out to Lake Yamdrok and beyond, or even Lake Namtso until the snowfalls block the passes later on in the winter.

One of the best and simplest tours for those that want to explore the Tibetan capital in the quieter time of the year, or see and learn more about the vast number of pilgrims that head for the city in the winter. This short, 4-day trip to Lhasa gives you the best of the city’s winter highlights, from the stunning Jokhang Temple, the most sacred of all temples and the heart of Tibetan Buddhism, to the beauty of the Potala Palace, sitting high above the city on Moburi, looking down on the people like a silent guardian. Once the seat of governance in Tibet, this beautiful palace is now the winter palace of the Dalai Lama and the iconic emblem of modern Tibet. 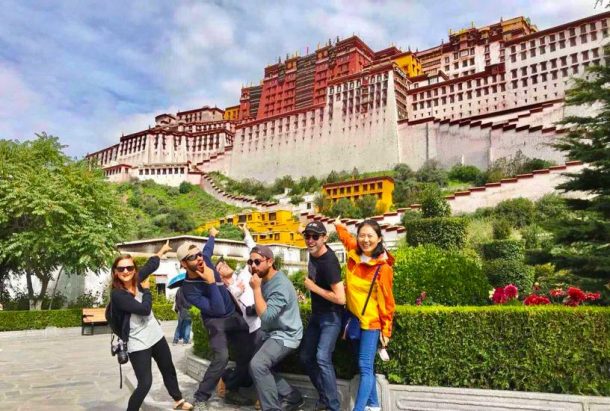 During Lhasa tour with our clients in winter

If a trip to Lhasa is not enough, then how about adding an excursion to one of the most sacred lakes in Tibet, Lake Yamdrok. A simple day out to explore the area around Lhasa to the southwest, which includes a visit to the Yarlung Tsangpo River, and a climb to the heady heights of the Kamba La Pass, which lies at around 4,770 meters above sea level and is on the road to Lake Yamdrok. Kamba La is the first place from which you will get a great view of the lake, shimmering in the winter sun below you. You can also see the beauty of the pristine white Karola Glacier along the way, before spending the day exploring around the shores of the lake.

November is the best time to travel to Tibet if you are interested in experiencing the customs and festivals of Tibet in the winter. This year, the awesome Butter Lamp Festival is being held from November 30 to December 4, and this custom-made five-day trip is designed to give you the best possible festival experience. This is a great chance to experience the true Tibetan culture in all its Buddhist glory, as people from all across the plateau descend on Lhasa to commemorate the anniversary of the death of one of Tibetan Buddhism’s greatest scholars and gurus, Je Tsongkhapa, the founder of the Gelug School of Tibetan Buddhism and the Ganden Monastery. Known locally as the Ganden Ngacho Chenmo Festival the festival always falls on the 25th day of the tenth month in the Tibetan calendar. 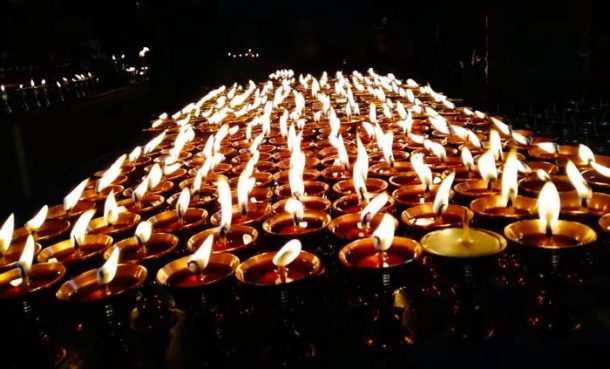 For the whole four to five days before the actual ceremony date, carved butter lamps are lit in windows, along rooftops, and on the sides of streets, and the people march around the kora route at Jokhang in long lines, muttering their Buddhist sutras and prayers as they go. As one of the most important festivals in the Tibetan lunisolar calendar, the Butter Lamp Festival tour includes a trip to Ganden Monastery for the celebrations and festivities there during the Butter Lamp Festival.

If you want something a little more adventurous for your short winter break, then there is nothing better than combining a tour of Lhasa with a trip to Ganden Monastery and the beautiful nunnery retreat at Terdrom, a famous meditation retreat since the 7th century, and the caves where the Buddhist guru, Padmasambhava, meditated with his consort, Khadro Yeshi Tsogyal, in the 8th century. 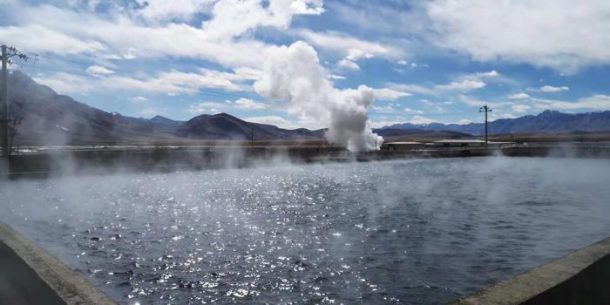 The site also includes a hot spring, which is popular with both locals and tourists, as well as the monks and nuns. Once you have spent some time in the caves and nunnery, you can spend the afternoon relaxing in the healing waters of the hot springs. On the way back to Lhasa the next day, you will stop off at the Drigung Til Monastery, the seat of the Kagyu School of Tibetan Buddhism and one of the few remaining sky burial sites in Tibet. This traditional burial is not open to viewing, and the actual burial site is restricted, so you will not be able to visit, out of respect for the traditional Tibetan customs. However, the monastery is a beautiful place, and is the premier center of meditative studies in Tibet, with more than 250 monks in residence.

If you are in the mood for visiting Mount Everest Base Camp, then do not despair, this can still be done throughout most of the winter months, and the period when it is most likely to be blocked by snow is in February when Tibet is closed to foreign tourism. An awesome 8-day trip, which incorporates the highlights of the Tibetan capital, this tour takes you through Gyantse and Shigatse, to the wonders of the world’s highest mountain, Mount Everest. 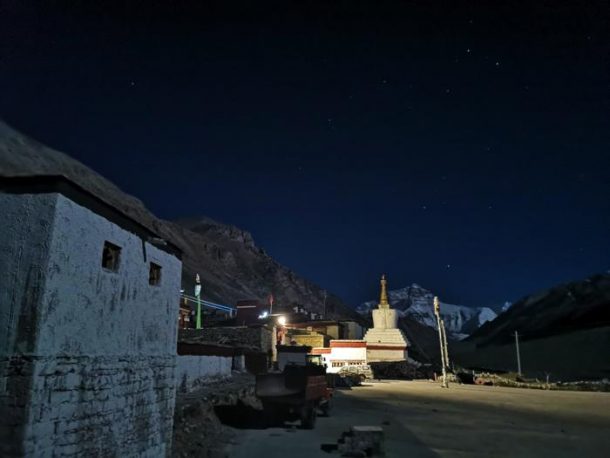 Everest Base Camp at night during EBC Tour with Explore Tibet

The tour includes a short stop at Lake Yamdrok and Karola Glacier, as well as a tour of the famous Kumbum Stupa in Gyantse, and the Tashilhunpo Monastery in Shigatse, Tibet’s second city. The stupa is 32 meters tall with 108 chapels, and is the only stupa of its kind in Tibet, while the Tashilhunpo Monastery, built by the first Dalai Lama, is the seat of Tibet’s second highest incarnation, the Panchen Lama.

But the highlight of this tour and the culmination of the trip is the chance to stand in the shadow of Mount Everest, at the famous Northern Base Camp, the first base camp set up on the slopes of the mountain almost 100 years ago. The views from the camp are spectacular, and if you are looking for that special photo, the view from the nearby Rongbuk Monastery, where you will stay the night before heading to the base camp, are best seen early in the morning, as the rising sun strikes the eastern side of the mountain.

How to Travel to Tibet: A Simple Breakdown of Your Options Dec 2, 2020