Tibetan Butter Sculpture – The most unique artform of Tibet 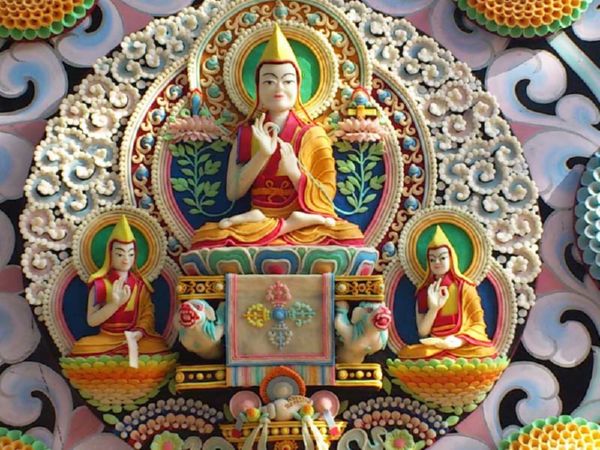 One of the most devout Buddhist lands in the world, Tibet is still a huge mystery to many people around the world. For most people, little is known about the people, the region, and its customs and religious beliefs and practices. However, despite all of this, the region is known to produce some of the strangest, yet most beautiful, pieces of artworks such as Thangka painting and Tibetan butter sculptures.

From the immense Buddha statues that adorn the monasteries and temples to the stunning giant Thangka paintings that are unveiled annually at various religious ceremonies and festivals, Tibet is adorned with amazing artworks. Yet, probably the most unusual of all the art in Tibet is the stunning beauty of the Butter Sculptures.

What are Butter Sculptures

Butter Sculptures are pieces of religious art made from the butter of the dri, the female yak. Butter has long been a valuable commodity in Tibet, and it is not just used for the delicious Tibetan Butter Tea. The malleable qualities of the dri butter have made it an ideal medium for making religious sculptures. Stone is too hard and takes too long to carve and there is little clay in the region. Butter Sculptures are usually a form of sculpted sacred offerings, usually hand-molded and hand decorated in a variety of shapes and colors. Sculptures can be anything from a few centimeters tall to several meters in height and can often be found on display in the monasteries and temples throughout Tibet.

The use of butter for religious sculptures began in Tibet during the Ming Dynasty in around the 1400s. The exact origins of the Butter Sculptures are shrouded in a veil of myth and mystery, of which there are two versions of the legend of how it began. In the first version, it is said that after the statue of the Sakyamuni Buddha was brought to Lhasa by Princess Wencheng, the monks wanted to bedeck it with flowers as an offering. However, in the bleak winter of the plateau, no flowers could be found, so the monks carved them out of frozen blocks of dri butter. The second version of the beginnings of Butter Sculptures lies within the dreaming world of Tsongkhapa. After a dream in which he saw the flowers of the plateau and the thorns of the bushes turn into lamps with a multitude of diamonds encrusted into them, he commissioned the monks to carve a sculpture of butter to visualize his dreams. The practice of this visualization of Tsongkhapa’s dream was the beginning of the sculpting of religious torma for display in the monasteries and temples, as a remembrance of the dreams of Tsongkhapa.

There are numerous types of butter sculptures that have evolved in the past 600 years since it first began, and these styles can be seen all over the plateau, lying in temples and monasteries as adornments and religious icons. The standard sculptures that can be seen come in six main designs, which are the most popular of styles of Butter Sculpture.

Flowers are one of the most popular and are traditionally mounted on wooden plaques and set into flower boxes. The Eight Auspicious Symbols, or Tashi Dargye, are also one of the most popular subjects of the Butter Sculptures and can often be found in most monasteries. There is also the Norbu Kagyi, known as the “Precious Jewel”; the Thunpa Punshi, which represent the four harmonious friends – Elephant, Monkey, Rabbit, and Bird; the Tsering Drukor, which are the six elements representing long life – old man, river, crane, deer, tree, and cliff; and the Nyima Dawa, which represent the Sun and Moon in Tibetan Buddhism.

The sculptures, also known as tormas, also represent other things, such as the deities, food, offerings, medicines, and the captured tormas which are believed to speed up production.

How to make a Butter Sculpture

This ancient art has been around on the plateau for centuries and is still well-practiced across the Tibetan region by the monks, in preparation for the religious ceremonies. Whether small and delicate r huge and impressive, these astonishing pieces of art are of major importance in Tibetan Buddhism. A Tibetan monk carves the intricate flowers on display

Making the sculptures requires a great deal of hard work and concentration. Once the idea is visualized, you will need to make the frames of the required size and shape, then you can start with the sculpting. Old sculptures are broken down and mixed with flax from the local grasses. The mix is pounded until it reaches a consistency that can be molded. This re-use of the old sculptures is the reason why no ancient Butter Sculptures have endured over the centuries from their first inception. Finishing touches are made to the ornate Butter Sculpture display

Some of the mixes should then be taken to be added to pigments to make the colored paints to decorate the sculptures. Once the sculpture is complete, it is normally placed on a plaque and set into a frame, which is also decorated with butter-sculpted flowers and decorations and are displayed for all to see and pray at.

In making the butter sculptures, the monks that sculpt them have to work in extremely cold conditions to prevent the butter from melting in the warmth of their hands. The monks repeatedly dip their hands into freezing cold water to maintain the coldness of their touch. The process of making the butter sculptures is a long and time-consuming process, which is both mentally and physically demanding. Most of the sculpting is done by hand, with a few tools for the more intricate carvings. The monks’ devotion in the sculpting of these unique artifacts reveals the intense loyalty that they have to Buddha, and many sculptors endure severe frostbite to make the artworks.

Held annually in Lhasa, at the Jokhang Temple, the Butter Lamp Festival signifies the end of the Losar celebrations, the Tibetan New Year. As part of the Monlam Prayer Week, which takes place in the second week of the first month in the Tibetan calendar, the festival marks the last day of the commemoration of the festival that celebrates the many miracles of Buddha. Throughout the day, Tibetans pray at the temples and monasteries, with many thousands prostrating in front of the Jokhang Temple throughout the whole day. In the evening, hundreds of thousands of butter lanterns are lit, sitting on rooftops and windowsills around the city, and especially around the entire length of Barkhor Street, the traditional kora path around the sacred Jokhang Temple. The sculpted lanterns are often in the shape of deities, people, and animals, and can be anything from a few centimeters high to several stories tall.