Documentation: Look Up Update File Thank you for creating with WordPress. Get Version 4.8.1
About Tibet / Tibet attraction / Tibet Travel Information / Tibetan Culture and Poeple / What to see in Tibet The hind side of Potala Palace on a bitterly cold winter, as the photo shows a frozen Lukhang Pond.

As your Tibet tour is going on, one of the most interesting thing you might notice anywhere in Tibet is the architecture, the earliest recorded religious architecture – the Jokhang temple in Lhasa (7th century) owes a lot of its influences from Newari (Nepal) and Pala (Indian) styles. 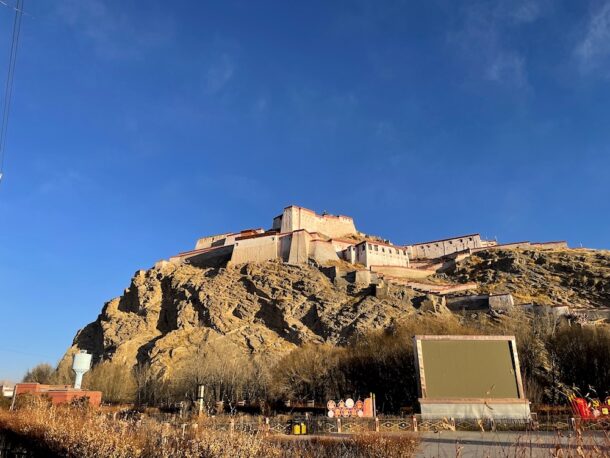 Still, Tibet has gradually grown its own style into more signifying Chortens (Stupas), Dzongs (forts), and monasteries. Chortens are traditionally built to house the cremated relics of Buddhas or higher Lamas. Still, the stand these take, among others, is humbly beautiful with their step-like structure above the mound-like hemisphere. And one of the most achieved architectural monument that may leave you in wonder is Potala Palace, the great American architect Frank Lloyd had a picture of the palace hung on his office wall. Though many other monasteries have similar architecture styles and themes, the stupa is a unique architecture on its own. Palkor Chorten Stupa (aka Gyantse Kumbum) in Gyantse.A magnificent piece of work as it is.

However, most commoners’ houses are patterned similar to each other, with inward-sloping walls made of large stone bricks and clay mud. A layer of twigs is tightly squashed and painted brown, giving the house a brown band. The rest of the house is all whitewashed, except the windows (a few places are not whitewashed like Sakya).

All the roofs are flat, as rain is scarce in Tibet, with a four-player flagpole on each corner. It is considered auspicious to have one’s house facing eastward, so most of the houses and the ones in remote areas are mostly faced eastward, giving better light and heat on time. Outside are mostly fenced with high wall compounds, painted with a Mongolian leading a tiger (Sogpo Tagtri) and an Indian Yogi Leading an elephant (Azara Langthri) for protection and prosperity.