The Spiritual Experiences of a Tibet Tour by Explore Tibet 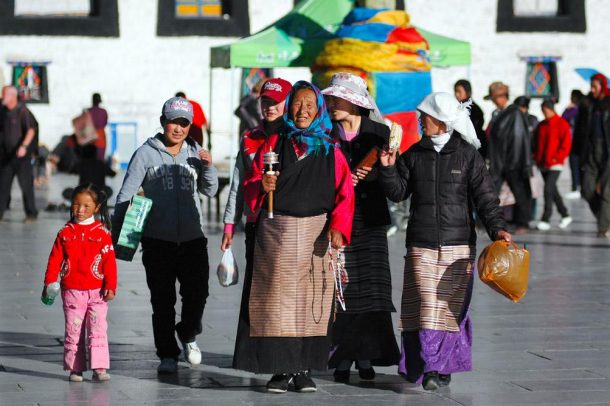 In a Tibet tour where some of the most beautiful scenery in the world can be found, where glaciers, mountains, and snow-capped peaks are the norm, and where there is no light pollution allowing you to see more stars than anywhere else on the planet, lives one of the most ancient and mysterious peoples in history. Tibet is a place where the people still live every day in the same traditional way. Where they seek to preserve their traditional way of life, and where it seems that, in many places, the time has stood still for almost a thousand years.

The ancient Tibetan culture is a spiritual one, where the daily lives of everyone are governed by their all-encompassing religion. Where every aspect of their religion is interwoven into their life in a way unlike any other. The dedication of the Tibetan people to their Buddhist rituals and spiritual discipline is one that can leave visitors in awe, and combined with their simple lives, is both charming and spiritually rejuvenating at the same time.

Walk the kora around Barkhor Street in Lhasa in the morning

A “kora” is a type of pilgrimage combined with a religious meditative practice that is done in Tibet around certain sites with high religious significance. One of the most famous is the kora that follows the roads of Barkhor Street, circling the ancient Jokhang Temple, the most sacred and revered temple in Tibet. Jokhang Temple, which was built in the 7th century AD, is the most sacred temple in Tibet and contains one of the most sizeable collections of Buddhist scriptures and statues in Tibet. The temple also houses the ancient statue of Sakyamuni Buddha at the age of twelve, which was brought to Tibet from China by Princess Wencheng of the Qing Dynasty on her marriage to the Tibetan King, Songtsen Gampo.

The kora route around the temple follows the roads of Barkhor Street, and on any day you go there, at any time of the year, you can see pilgrims walking around the kora, with prayer beads in hand, reciting the scriptures and spinning prayer wheels as they make their way around the temple. Some of the pilgrims walking the kora around Jokhang Temple have walked for thousands of kilometers to get to Lhasa, and it is a lifetime ambition for many Tibetan Buddhists to walk the koras around the most sacred sites in the region.

Sera Monastery is one of the Three Great monasteries of the Gelugpa School of Tibetan Buddhism and lies around 5km to the north of Jokhang Temple in Lhasa, the Tibetan capital. Sera is unique in other ways as well, including the famous debating sessions of the monks, which have been a long tradition within the teaching methods of the Gelugpa School at Sera. The debates are held daily, and the senior monks will grill the younger monks on articles of Buddhist doctrine. A standing monk, who fires questions at the younger monk, seated on the ground, starts the debate. The younger novice monks must then respond, putting forth their arguments on the reasoning of the doctrines, and are expected to respond in ways that show their understanding of the spiritual aspects of Buddhism.

What makes the debates unusual are the dramatic hand gestures, body movements, clapping that accompanies both the question and the response. These exaggerated movements make the debates lively and articulate, and the air is charged with energy as the noisy debates continue.

Another of the Three Great monasteries of the Gelugpa School of Tibetan Buddhism, Drepung Monastery in Lhasa is well known for its huge Buddhist Thangka paintings, which are unfurled once a year during the Shoton Festival. The festival lasts from sunrise to sundown, and thousands of people come to the monastery to witness the unveiling of this huge representation of Buddhist deities. Tibetans believe that it is an honor and a moment of happiness to touch the hem of the Thangka, and they crowd the area around the hill where it will be unveiled as the sun comes up. The ceremony only lasts for a few hours, but the crowds of devoted Buddhists flock to the foot of the Thangka to pray at the base of the image of Buddha and touch the hem of the painting for luck and good fortune. While the Thangka is laid out, monks and lamas chant sutras in an open tent that stands across from the painting, and by around 2:00 pm, the ceremony is over and the Thangka is once again rolled up, not to be seen for another year by the crowds of devotees. One of the most spiritual ceremonies in Tibetan Buddhism, the Thangka represents the Buddha Sakyamuni and is one of the most revered artifacts in the Buddhist religion.

One of the biggest draws of Tibet for most foreign tourists is the visit to the world’s highest mountain, Mount Everest, in western Tibet on the border with Nepal. Shared by Tibet and Nepal, with the border crossing the exact summit of the mountain, the northern base camp is one of the most popular places from which to view this huge mountain. Lying at an altitude of 5,150 meters above sea level, the base camp is the starting point for countless climbing expeditions that have made their attempts to summit the mountain. Mount Everest at Everest Base Camp

For many western tourists, the journey to Mount Everest is akin to the pilgrimage of the Buddhist Tibetans to Lhasa. It is a must-do part of almost every trip to Tibet. The Qomolangma mountain rises to a massive 8,848 meters (29,002 feet). It is one of the most amazing experiences is to spend the night in the tent guesthouses at the tourist base camp. You can check our best selected Mt Everest Base Camp Group Tours to lead by our Tibetan tour guides.

Far out in the west of Tibet, in Ngari Prefecture, lies the holiest natural site in the world, and one that is the center of the universe in four different religions. The holy Mount Kailash, known in Hinduism as Kailasa, in Buddhism as Kangrinboqê or Gang Rinpoche. It is a huge pyramid-shaped mass of black rock that stands tall above the other mountains in the Gangdise Range of the Transhimalaya. For four religions – Hinduism, Buddhism, Jainism, and Bon – the sacred Mt. Kailash is known as the center of the universe, Mount Meru, or the axis mundi. Around the mountain is one of the most challenging kora routes in Buddhism and Hinduism. Which covers a distance of 52 kilometers circling the holy mountain. A three-day trek for the average fit tourists, many Tibetans races around the kora route in just one day, while others take weeks to complete it. They are prostrating themselves on the ground and traveling the route one body length at a time.