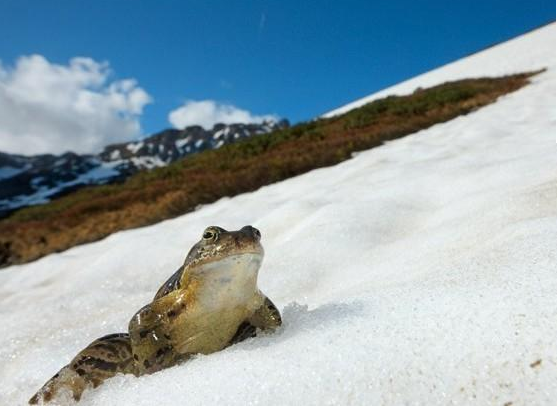 As soon as you step onto this mysterious land, you will be not only immediately attracted by the snow-clad peaks, the wonderful mountains, and rivers, but also the special and various animals in the Qinghai-Tibet Plateau.

There is one particular frog, the snow frog, that lives in this holy land. Explore Tibet Team, a professional Tibet travel agency, introduces this little spirit to you. Snow Frog, also known as the Chinese forest frog, lives in the mountain forests and swamps of Tibet snow-land. Thus we call it Snow Frog. It is born in spring and falls into hibernate in cold winter, so it is critically rare. It is a very valuable flog because its meat is as delicate as chicken, but the meat of the frog is sweet, cool, and intoxicated and contains profuse protein, sugar, moisture, and a little fat. Besides, snow Frogs were used as Tibetan medicine for hundreds of years, and it can treat pulmonary tuberculosis and impotent or consumptive disease. What’s more, it has the functions of clearing heat, improving vision and nutrition.

Snow Frog is a cold-blooded critter, never much warmer than its environment. Besides, the frog has the ability to change its colors according to its living habitats, so as well as the snow frog. Usually, snow frogs are generally recognized as exceptional jumpers, and female snow frogs are usually larger than males.

Great attention has been paid to the snow frog because of its important medicinal and economic value. Snow frog is rich in protein, calcium, and so on. So it is one of the best exotic dishes from the Tibet area. Explore Tibet Team, a professional Tibet travel agency, offer an earnest invitation to you to Tibet.