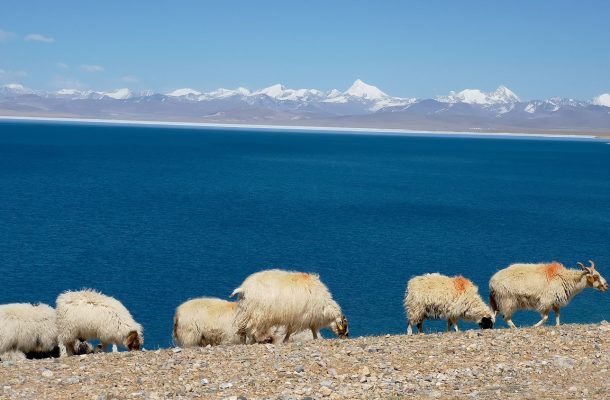 Far out in the west of Tibet, in Burang County of Ngari Prefecture, lie two lakes, side by side. While one is renowned as a sacred lake conceived in the mind of Lord Shiva, the other is said to have been created by Ravana after being granted his wish by Lord Shiva.

Lake Manasarovar and Lake Rakshastal lie side by side in the shadow of Mount Kailash, the revered mountain in Tibet. And while Lake Manasarovar, also known as Mapam Yumco, is a sacred lake, Rakshastal is believed to be the opposite and is known as either the Devil Lake of the Ghost Lake.

In Tibetan, The Ghost Lake is known as La’nga Co, and is bitter and saline, in stark contrast to its twin, Lake Manasarovar, whose water is sweet and fresh. And while Lake Manasarovar has long been a sacred lake in Tibetan Buddhism, Hinduism, etc., Lake Rakshastal has never held much significance in the religious legends of the area.

In Sanskrit, the name of the lake is translated as “Lake of the Demon”, and it is often called Ravan Tal, considered to be the place of penance for the demonic King of Lanka in Hindu theology.

The Ghost Lake lies next to its twin, Lake Manasarovar, and is even connected by a channel, known as the Ganpa Chu. This long channel connects the two lakes, and while Manasarovar is at a slightly higher elevation than Rakshastal, the channel is also slightly elevated from the standard water levels of the two lakes, and is normally dry throughout the year.

The water of these two lakes could not be more opposing. While the waters of Mapam Yumco are sweet and fresh, the waters of La’nga Co are bitter and tepid, and extremely salty to the taste. However, Tibetans do pray at both lakes when visiting Lake Manasarovar, because of the tolerant understanding of the two sides of the coin.

The shape of the lakes is almost as opposing as the water content, with Mapam Yumco being round like the sun, and Rakshastal being shaped like the crescent moon. In Tibetan Buddhism, opposites like this occur everywhere, just as good and evil oppose each other, but are both necessary.

The coexistence of both sides is harmonious, and one cannot exist without the other. The Holy Lake and the Ghost Lake exists in perfect harmony, under the watchful gaze of the sacred Mount Kailash. The lakes reflect, to some extent, the idealism of Buddhism itself.

Legends of the Lake

There are many legends about the lake in both Hinduism and Buddhism, and the most popular is the legend of Lankapati Ravana, who once worshipped Lord Shiva on Mount Kailash in an attempt to become more empowered. The King of Lanka desired more power and is a major disciple of Lord Shiva, He stood upon one leg and began his worshipping.

Legend tells of how Ravana offered up one human head a day as a sacrifice to Lord Shiva until he finally managed to impress the lord and his wish was granted. In his rejoicing at the powers he received from Lord Shiva, Ravana created the salty lake as his test of the new powers he had been granted.

In another version of this legend, it is said that Lord Shiva was angered by the bad deeds and sacrifices of Ravana, and created the lake to trap Ravana in, covering the lake with the burning sun. It is also said that Lord Shiva freed Ravana much later, after he had apologized for his arrogance and bad deeds. And while Ravana wept in the lake, his tears turned the waters salty.

While the waters of the Ghost Lake are bitter and salty, the landscape around the lake is exceedingly beautiful. There may be no plants in or around the edges of the lake, mostly due to the extremely saline water, but the scenery surrounding the lake is outstanding. Dark red hills lie to the forefront of the lake, and the colors of the surrounding countryside are some of the most attractive in Tibet.

When you stand at the shores of the Ghost Lake, you will never find animals grazing or drinking from the water, and the area for many meters around the lake is bare and desolate. Facing the lake’s stunning blue waters, it can feel like you are staring out at the edge of the universe, and there are stories that tell of three-foot high waves that ripple across the lake, even when there is no wind to stir the surface.

Located next to the Ghost Lake, Lake Manasarovar is one of the Great Three Sacred Lakes of Tibet and is often considered to be the holiest of them all, is the place where Buddha was conceived by his mother, Maya Devi, and father, Suddhodana, the ruler of the Shakya clan. In Hinduism, it is believed that the lake is the earthly representation that was created in the mind of Lord Shiva, and is the personification of purity. Both Buddhists and Hindus believe that bathing in the lake can cleanse one of the sins of an entire lifetime.

Considered to be the most sacred mountain on earth, Mount Kailash, also known as Kailasa or Gong Rinpoche, lies a short distance to the north of the twin lakes and is one of the holiest sites in Tibet. Considered to be holy in four religions – Hinduism, Buddhism, Jainism, and Bonpo – Mount Kailash is considered to be the earthly representation of the legendary Mount Meru, the mountain at the center of the universe where the gods reside.

At just 6,638 meters (21,778 feet) above sea level, this is not one of the highest mountains in the world, but this unusual pyramid of black rock is deemed to be so sacred that no mortal man has ever scaled its holy slopes, and with the sacred status of the mountain in China, none ever will.

The mountain is also the location of the most popular and hardest trek in Tibet, known as the Kailash Kora trek. The trek follows the pilgrimage route around the mountain, known in Tibet as the “kora”, which covers a distance of around 52 kilometers and is done by tourists in around three days.

Deemed to be a major pilgrimage destination, Tibetans believe that to circumambulate the mountain can bring great merit, and to complete the kora thirteen times can bring you almost to enlightenment. It is also said that anyone who completes 108 (an auspicious number in Tibetan Buddhism) continuous circuits of the mountain will reach instant Buddhahood.