Highlights of a Tibet Winter Tours 2022 If you are planning a budget tour to Tibet, then you need to know how to save money on your Tibet tour, to make the best out of it. Tibet Winter tours are the best choice for people wanting to tour Tibet on a budget, and it can make the tour even more affordable than you thought. So what are the benefits of touring Tibet in winter? Why visit Tibet in winter?

One of the biggest myths of touring in Tibet is that it is too cold in winter, and you will get too cold. With the higher altitude, the air is thinner, making it warmer once the sun comes out than at lower altitudes. This makes Tibet winter tour more adventurous tour. So, even in the depths of winter, a nice sunny day can be warm enough to make you lose that thick jacket. Snow is also a rarity in most parts of Tibet, and it actually snows less than in many cities in Northern China.

Winter normally runs from November to mid-February, and since it is winter, the temperatures at night can plummet to well below freezing, giving a big range difference between night and day. Temperatures range from minus ten degrees to around 10-12 degrees in winter, and while it may not be to the liking of some, it is the perfect time to view this beautiful plateau landscape.

For budget travelers, it is the ideal time to tour Tibet. With it being the off-season for tourists, there are many discounts that can be availed of, which is of benefit to budget travelers. Hotels, flights, attractions, festivals, and even train tickets are often cheaper in the off season for Tibetan tourism, so you can make really big savings on your trip. 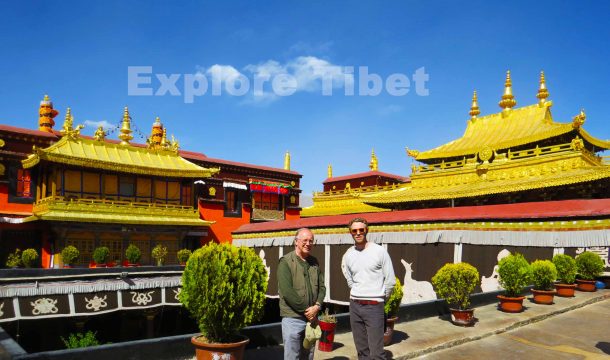 Most Popular Tibetan Festivals In winter

There are few famous festivals in winter which you could experience during Tibet winter tour in Tibet.

The Palden Lhamo festival happens on the 15th day of the 10th lunar month in the Tibetan calendar, to honor a wrathful deity called Palden Lhamo, the only female among the “Eight guardians of the Law”. She acts as Tibet’s protector deity, a defender of Buddhism in Tibet, and the special protector of the Panchen Lama and the Dalai Lama who are the religion’s traditional main leaders. Palden Lhamo is revered as a female deity who has three eyes and rides a white horse with an eye on the rear of it, and on the festival day in Barkhor Street in Lhasa, people parade a float of her and carry figures of the goddess.

According to Tibetan legend, the daughter of Palden Lhamo, White Lhamo, fell in love with the guardian of the Jokhang temple, and decided to marry him without consent. Annoyed by her daughter’s behavior, Palden Lhamo drove the guardian from the temple to the south side of the Lhasa River, where White Lhamo could only gaze at him from the northern bank.

To show their pity for poor White Lhamo, Tibetan women worship her during the festival, and pray for their own love to come. On the day of the festival, the women get up early and go to Barkhor Street to burn juniper branches and other plants in honor of the goddess, before going to pray in the famous Jokhang Temple. Every year on the 25th day of the tenth month in the Tibetan calendar, people celebrate the Tsongkhapa Butter Lamp Festival. The festival commemorates the death of Tsongkhapa, the great religious reformer who founded the Gelugpa school of Tibetan Buddhism in 1409. Although it is the latest sect, the Gelugpa sect now has the biggest influence in Tibet. When Tsongkhapa saw the corruption and disorder in Tibetan Buddhism at that time, he decided it was time for change and reform. He founded the Gelugpa sect to save Buddhism in Tibet, and make a new start for the people. In Tibetan, gelug means “Good Discipline”, and the sect was built and focuses on strict disciplines and restricted monastic lives. With the good management of the order, Gelugpa soon spread across Tibet, winning the hearts of the people. Today, Tibetans all over Central and Eastern Tibet lit butter lamps in monasteries, temples and their homes to remember this great lama. Lama Tsongkhapa’s seat was in Ganden monastery near Lhasa, and his tomb is located there now. So on this particular day, there is a special ceremony held there for the whole day, to commemorate this great master. In Barkhor Street, in Lhasa, myriads of butter lamps are lit on rooftops and windowsills with prayers chanted to commemorate the parinirvana of Tsongkhapa throughout the night.

The Parinirvana or death celebrations are a very festive time, and are fueled with activities including Buddha Dance, puppet show and butter sculpture exhibitions staged by various monasteries. In daytime, people will steam into monasteries to pray. Flanked with huge flower stands containing numerous butter sculptures, Barkhor Street will draw tens of thousands of people from far-flung towns and villages annually during this festival. It is a time to rub shoulders with the locals, to delve into the authentic local life, to be carried away by the splendid butter sculptures, and to take a unique peek into their spiritual realm. Local pilgrims at Ganden monastery during the Festival

The Tibetan New Year – Losar – is the most popular festival of the Tibetan calendar, and while it is meant to be just a three-day festival, it can last for up to two weeks of celebrations. The main celebrations happen during the first three to seven days, depending on the region. The period before Losar is the time when people prepare for the celebrations, and decorate their houses and the streets, as well as preparing food for the celebration.

Tibetans stay at home on the first day of the New Year, to spend it with their family, the most important people in their lives. On the morning of the New Year, the people rise before daybreak to burn pine rosin and place dyed barley and ears of wheat on the roof of the house, as a wish for a prosperous New year. The women also get up early to collect water from the nearest river or lake. The first water of the new year is considered auspicious, and the family wait at home for the women to return, so they can wash their faces with the auspicious water.

Once they are washed, and any livestock are fed, the family will dress in their finest clothes. Men put on fine robes and leather boots, while the women dress in colorful aprons known as “Bangdian” and headdresses decorated with corals, pearls, agate, and other precious gems. The mother of the family will then proffer the family’s Qiema box to each member of the family, and each will take a little tsampa from the box. As they take the food, they give thanks to the mother and the rest of the family with prayers and traditional greetings. Tibetans Ploughing the field with Yaks

On the second day of the New Year, Tibetans spend their time visiting friends and other relatives, to greet them with blessings for a good and auspicious new year. The host greets all visitors with the Qiema box, and the hostess pours tea and Chang for their guests. Then, from the third day on wards, the celebrations and festivities start in earnest, with such ceremonies as the Weisang burning, where people burn cypress and pine branches and chant Sutras to pray for peace, health, and a good harvest.