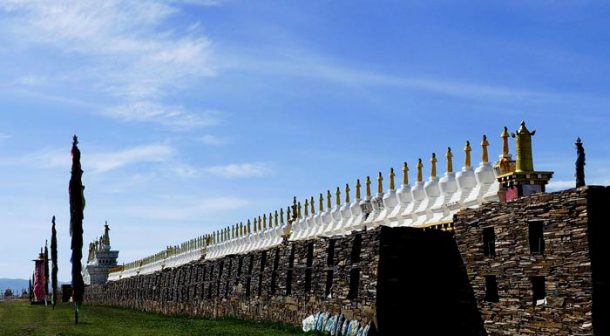 Beijing is known for having the Great Wall of China, but this is not the only “great” wall in the country, and for some, the “other” wall is much more important.  Located in the Garzê Tibetan Autonomous Prefecture of Sichuan Province, in Sershul County to the west of Chengdu, lies the longest mani stone wall in the world.

This is an  wall of Tibetan Buddhist mani stones(prayer stones) stretches for 1,750 meters and stands around 3.5 meters in height. Started by the first Bage Rinpoche, Sangye Phuntsok, in 1671, who laid the first mani stone on the Tashikar Grasslands, the wall has been built up by the many thousands of pilgrims that have visited the grasslands over the last 300 years. The wall is also embedded with more than 3,000 small stone statues of Buddha, as well as over 6,000 scrolls containing sacred Tibetan texts embedded into the wall.

In Tibetan Buddhism, Mani Stones are stone slates or rocks, usually quite flat, that is inscribed with the six-syllabled Avalokiteśvara mantra. This well-known mantra, which is read as “Om Mani Padme Hum”, which translates directly to “Hail to the jewel in the lotus”, is a form of prayer in Tibetan Buddhism, similar to the prayers that are found on prayer flags all across the Tibetan ethnic regions. These prayer stones are placed along side roads andrivers, or even placed together to form mounds and cairns, and sometimes wallstoo. The stones are placed as an offering to the protective spirits of theplace.

Mani walls are often found in areas inhabited by Tibetan Buddhists, and across the plateau, travelers are often confronted by these devotional prayer walls. Sometimes located close to a Chorten or stupa, although more often located in some isolated place far from anything, these mani walls, which are made up of hundreds, or even thousands, of mani stones, are built over time as one stone is placed on another, gradually building the stones into a wall as new stones are placed on the pile by Buddhist devotees.

The Bage Mani Stone Wall has become one of the most revered pilgrimage sites in Garzê, and to this day, there are thousands of pilgrims that come to the site to add their own mani stones to the wall every year. The site of the wall now has a complete management committee, due to its religious reverence, and the wall is compared to the Jokhang Temple in Lhasa by the local Tibetan Buddhists in western Sichuan Province, as travel to Lhasa is a long and arduous journey, often not possible for many Tibetans in Garzê.

Daily, hundreds of pilgrims come to the wall to pray and prostrate themselves in front of it, starting as early as 4:00 am and running until around 8:00 pm. Many of the local Tibetans in the area treat the prostrations in front of the Mani wall as a daily routine, and come every morning to pray, before going back home to start their normal day. The pilgrims conduct their ritual prayers and prostrations in a clockwise direction around and along the wall, usually with a small prayer wheel and rosary in their hands as they walk.

Worshipping at a local mani wall is a Tibetan tradition, and in Tibetan Buddhism, it is believed that worshipping at such sacred and holy places will bring blessings from Buddha and merit on the journey towards enlightenment. For the residents near the Bage Mani Stone Wall in Garzê making their daily ritual trek around and along the wall, they are often accompanied by pilgrims that have come hundreds and even thousands of kilometers to get to the longest mani wall in the world.

Not far from the mani wall, also in Sershul County, lies the Bore Monastery, a sacred monastery of the Gelug School of Tibetan Buddhism that has been a major influence on Tibetans in the area for more than 1,300 years. Originating from the time of the Bon religion in Tibet, which predates the present Buddhist faith and was the religion of the Tibetan people until the 7th and 8thcenturies, this ancient monastery has been relocated several times over the centuries. Mostly due to the religious fluctuations across Tibet over the centuries, the monastery has been moved six times, and was erected in itscurrent location in 1818 during the pro-Buddhist Qing Dynasty.

In the 7th century, the then Bonpo monastery lay on the route of Princess Wencheng on her long journey to Lhasa to marry the 33rd Tibetan king, Songtsen Gampo. As one of the monasteries in which it is believed the princess stopped on her journey, the monastery was brought under the wings of the Tashilhunpo Monastery in Shigatse in the 15th century. And with its extreme age and long history, the monastery has a collection of more than 2,000 ancient religious and cultural relics, a few hundred of which were shown in the Beijing Cultural Palace of Nationalities in June of 2014, one of the most stunning shows of the ancient cultures of China the world has ever seen.

Buttons in the wall﻿

Both the mani wall and the monastery have long and varied histories in Sichuan Province, and if you look closely at the mani wall, you will see hundreds of thousands of small Tibetan buttons stuck in between the stones of the wall. These buttons, placed there by worshippers that have come to the wall to pray and prostrate, are stuck into the wall, held in place with yak butter, as a way to record their visit to the Bage Mani Stone Wall. This tradition of recording their worship using a button dates back several hundred years, and has become ahabit for many visitors to the wall, as the button is a personal link forreceiving the buddha’s blessings.

While the wall may not be in the Tibet Autonomous Region, which lies much further to the west of Garzê, this area of Sichuan Province, as well as areas of Gansu, Yunnan, and Qinghai Provinces, were once a part of the great Tibetan Empire,and the original areas of U-Tsang, Kham, and Amdo that once made up ancient Tibet. As this area is outside the Tibet Autonomous Region, it is possible to visit it and make your own clockwise prayer walk along the mani wall without needing a Tibet Travel Permit and a guided tour.